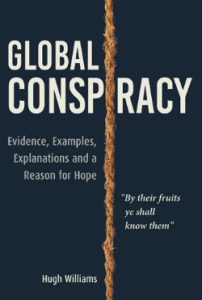 Global Conspiracy. Evidence, Examples, Explanations and a Reason for Hope.

“By Their Fruits Ye Shall Know Them.”

The author is one of those people who rejects both of the official narratives behind the COVID crisis and Climate Change. He rejects a whole lot else besides – all of which makes him deeply suspicious of the way the government ignores any voices that question its policies, especially over these two dominant issues.
Hugh’s suspicions are made even stronger by the UK government’s intention to punish anyone who dares to speak out against those policies by
bringing in a raft of oppressive legislation, including the proposed Online Safety Bill.
With political opposition being silenced, that gives us all the proof we need that we now live under a totalitarian regime. With the mainstream media failing to point this out, this book has been published to try to expose what is going on.

Privately published in August 2022, copies available from the publisher – see below.

Dedication
Preface
A list of some famous people who have stated their firm conviction that there really is a global conspiracy
Three bogus scientific subjects that dominate our lives
How is it that so many have not spotted the frauds
How has all of this been controlled by the conspirators?
Recent events that have not been properly explained
What lies ahead
Conclusion…
…and a Reason for Hope

Global Conspiracy. £17.00 including postage and packing to the EU.

Global Conspiracy. £19.00 including postage and packing to the rest of the world.