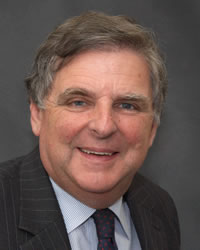 Hugh Williams is the proprietor and founder of St Edward’s Press and has been a published author since 1988. He has written nearly twenty business books, all with the aim of making technical business matters (law, taxation, and business procedures etc.) easier for a lay business person to understand and put into practice.

Though he has now retired, for over forty years he practised as a chartered accountant and during this time his firm won three national awards, principally for their customer service and customer-focused approach.

In 1993 Hugh started St Edward’s Press, publishing a British Calendar of Saints. This product is still available but not advertised. If you would like a copy please contact the company.

In 2006, having given a number of lectures on the subject, he wanted to publish his ‘Life Without Timesheets’ and set up St Edward’s Press for this, and the book became the company’s first official publication.

Three years later, in 2009, Marta Andreasen approached him to publish her jaw-dropping tale of corruption inside the EU – Brussels Laid Bare – a task the company was delighted to take up.

The following year, 2010, Olly Figg asked if St Edward’s Press would publish his own entertaining exposé of how the EU works – Europe on 387 million Euros a Day. This publication is now out of print but the author is considering writing an update.

In 2011 Hugh Williams decided there was a place in the market for a slimmer approach to what Olly Figg had written and so St Edward’s Press published ‘101 Reasons to leave the EU’. This booklet played its own significant part in the 2016 referendum campaign and debate – and has sold over 40,000 copies. It has been updated for the Brexit negotiations.

2013 saw the launch of Hugh Williams’ politically incorrect but very comprehensive world history reference book From Ur to Us – everything you need to know about history, described by a reviewer as “a veritable treasure trove of useful information.”

We are a small Publishing House run from a family home. Our phone number is 01793 762417 but is not always manned - our apologies if we miss your call, please leave a message. Alternatively call 07812 426538. E-mail info@stedwardspress.co.uk