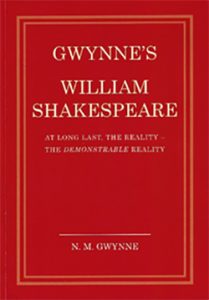 At long last the reality –  The Demonstrable Reality

And was Shakespeare the single most influential person – whether beneficially influential or otherwise – in English History?
In the entire world of literature, there is perhaps – setting religion aside – no subject that has attracted so much critical attention as the works of  William Shakespeare. And what is more – again arguably – no subject that is more important.
“At long last the reality.” Yes, those words of this book’s subtitle are well worth emphasising. However well acquainted any of its readers are with Shakespeare’s works, they can expect eye-opener after eye-opener as they work their way through this enjoyable, compelling and fascinating treatment of a man often presented as the “Greatest writer in English history”


Gwynne’s William Shakespeare:  £17.00 including post and packing to the EU.

Gwynne’s William Shakespeare:  £19.00 including postage and packing to the USA and the rest of the world.

We are a small Publishing House run from a family home. Our phone number is 01793 762417 but is not always manned - our apologies if we miss your call, please leave a message. Alternatively call 07812 426538. E-mail info@stedwardspress.co.uk